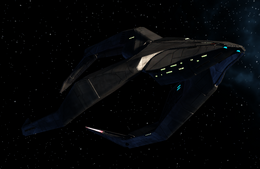 The Jovian Intel Heavy Raider is a Tier 6 Raider which may be flown by characters of any faction. This starship can be used from any level upon completion of the tutorial experience. As you level up, this ship gains additional hull, weapon slots, and console slots.

Players can obtain this starship as a ultra rare drop from the [Infinity Lock Box]; it comes in an [Infinity Prize Pack - T6 Ship] choice package, which is bound to you until a ship is chosen. The boxed ship is not bound and so may be traded to other players or bought and sold on the Exchange for energy credits under the name [Special Requisition Pack - Jovian Intel Heavy Raider [T6]].

These versatile and scrappy starships originally comprised the entirety of the fleet of a small survivalist outfit of resource pirates found in the Sol System of the 32nd century, who made a habit of raiding the United Earth's outbound resource convoys. The ships are outfitted especially well for their specific purposes, having been adapted for the roles of scrapping and salvaging resources. These same modifications allow the ship to also serve as a capable Raider in standard fleet battles, employing hit-and-run tactics meant to debilitate the foes, and utilizing the harvested resources to perform improvised field improvements to their own capabilities.

The Jovian Intel Heavy Raider comes with an Experimental Weapon slot. This additional slot does not fit standard weapons. Unlike standard starship weapons, Experimental weapons are not affected by weapon firing modes, such as those granted by bridge officer abilities.

This vessel comes with the unique [Threat Deterrent Charge Launcher]. The Threat Deterrent Charge Launcher periodically leaves behind an energy charge which will seek out your current target at high speeds. This electrically-charged projectile is built to interfere with the enemy's systems, making subtle changes to their weapons' targeting parameters, that will make your ship appear to be less threatening than it might otherwise be, and eventually render them briefly incapable of attacking your vessel.

Equipping this weapon has a passive masking effect on your other ship's systems, making them appear to be less threatening than they otherwise would. This has a passive effect of reducing the amount of Threat your starship generates.

As an Intelligence starship, the Jovian Intel Heavy Raider is capable of deploying an Intel sensor drone with the Gather Intelligence ability.

By using an [Experimental Ship Upgrade Token], the Jovian Intel Heavy Raider may be upgraded to T6-X, unlocking an extra ship device slot, universal console slot, and the ability to slot an extra starship trait.