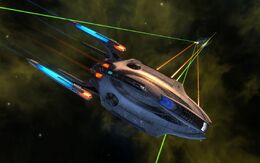 The Jupiter-class Carrier is a Tier 6 Science Carrier which may be flown by Starfleet characters, including Federation-aligned Romulan Republic and Dominion characters. All faction restrictions of this starship can be removed by having a level 65 KDF character or by purchasing the Cross Faction Flying unlock from the Zen Store. This starship can be used from any level upon completion of the tutorial experience. As you level up, this ship gains additional hull, weapon slots, and console slots.


Purchasing this starship will unlock a Fleet Ship Module discount when purchasing the Fleet Jupiter Carrier.

The Jupiter Carrier is the first of its kind to be built by Starfleet Engineering. It was designed to serve as a mobile fighter launching platform with durability and fleet support in mind. Being one of the largest Starfleet science ships in production, it sacrifices maneuverability for hull strength over Cruisers and Escorts. Based on the mighty Jupiter Class Dreadnought, this ship was designed to support its fleet's operations in many combat situation, capable of launching fighter or frigate craft in combat.

The Jupiter's design was selected by the Star Trek Online community through the Design Your Ship promotion.

Additionally, Jupiter Carrier is capable of equipping the Callisto Light Escort hangar pets. These Frigates are more durable and provide more firepower than the standard fighter pets - they are equipped with Phaser Quad Cannons, Phaser Dual Heavy Cannons, Quantum Torpedoes and Phaser Turret. They can also use Torpedo: Spread I and Cannon: Scatter Volley II abilities. Advanced and Elite Hangars of Callisto Frigates come with higher ranks of these abilities. The Rare Callisto Light Escorts are available from the Ship Requisition Officers.

The Advanced variant of the Peregrine Fighters or Callisto Light Escorts can be obtained from the Dilithium Store, while the Elite variant is obtainable from the Fleet Starbase with unlocked Tier V Communications Array.

By using an [Experimental Ship Upgrade Token], the Jupiter-class Carrier may be upgraded to T6-X, unlocking an extra ship device slot, universal console slot, and the ability to slot an extra starship trait.