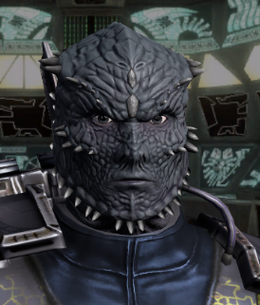 First Kar'ukan was a Jem'Hadar Elder in the Dominion fleet coming to join the Dominion War in 2374. At Sisko's behest, the Prophets prevented his fleet from reaching the Alpha Quadrant. However they merely displaced the fleet in time, causing it to reappear in 2409. Kar'ukan served as the executive officer of Loriss once they captured Deep Space 9