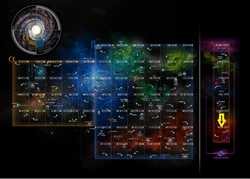 The Kartella System is a system located in the Yontasa Sector of the Delta Quadrant.

Kartella Prime is a desolate world on the edge of Vaadwaur space. Barely registering as M-Class and beset by almost constant electrical storms, the planet has never been a prime target for colonization. However, its abundant deposites of dilithium and uridium were enough to attract groups of miners. Over the centuries, the planet has been populated by groups from more than a dozen species. Decades of deep mining took its toll. The veins that cross Katrella Prime were exhausted one by one, and the miners moved elsewhere. Now only the abandoned tunnels remain.