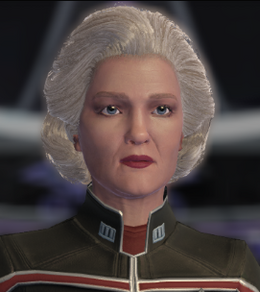 Kathryn Janeway is a Starfleet Admiral and former commanding officer of U.S.S. Voyager.

Janeway was born on Earth in the first half of the 24th Century. By the 2360s she had graduated from Starfleet Academy and served as a science officer aboard the U.S.S. Al-Batani.

In 2371, Janeway took command of U.S.S. Voyager, with her long-time friend Tuvok as chief of security. The ship was stranded in the Delta Quadrant soon after its launch and it took Janeway and her crew until 2378 to find a way home. During this voyage, Janeway made several scientific discoveries and many notable first contacts with a number of species.

By 2379 Janeway had been promoted to Vice Admiral and no longer commanded Voyager, now working with Starfleet Command. She briefed Captain Jean-Luc Picard on the changed political situation on Romulus.

In 2388, Admiral Janeway commanded a modified Delta Class Shuttle on a survey mission of the Hobus System. She and her crew observed that the Hobus Nebula left in the aftermath of the supernova bore a resemblance to the McAllister C-5 Nebula, making it a plausible location for quantum singularities which could be used to travel to Fluidic space. While on the mission, her vessel detected the warp signature of an Undine vessel; however, this turned out to be a Romulan ruse intended to cover up tests of a subspace weapon.

In 2401, Kathryn Janeway was part of a contingent of retired and current Starfleet officers, also including Ambassador Worf, Admirals Beverly Crusher and Chakotay, as well as retired Captains Ezri Dax and Tuvok, who all appealed to the Federation Council to reconsider its position on the Klingon-Gorn War and to support the Klingon Empire.

In 2408, Admiral Janeway assumed command of the U.S.S. Tucker to conduct another annual survey of the Hobus System. She suspected Undine, or another race's involvement in the star's destruction, which lead to the annihilation of Romulus 21 years prior. The Tucker's sensors again detected an Undine warp signature; the outcome of this encounter remains unknown, as the records have been redacted by Starfleet Intelligence.

In 2410, Admiral Janeway returned to the Delta Quadrant, overseeing Delta Quadrant Command at her posting on the Jenolan Dyson Sphere. Later that year, the Doctor wished to inform Admiral Janeway about the recent discovery of the Iconian involvement with the rise of the Vaadwaur and the capture of Sela, hoping that she might be able to move investigations forward at a faster pace.

By the 32nd century, the Janeway-class had been named in her honor of the Admiral.