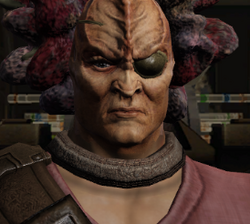 Kazon are an aggressive humanoid species native to the Delta Quadrant.

They were encountered by the U.S.S. Voyager in 2371, when they were a strongly patriarchal society divided into eighteen different sects, although that number constantly changes. Each sect has possession of different natural resources over which the sects fight each other. Although they lack any centralized representation, the Kazon Collective refers to the entirety of the species.

The Kazon were a subjugated race, used as slave labor by the Trabe, who had conquered their homeworld. In 2346, Jal Sankur convinced the Kazon sects to put aside their differences and rise up against the Trabe. In doing so the Kazon took the Trabe's ships and technology, forcing them to become a nomadic species, never allowing them to settle on a new world.

In 2372, the leaders of all Kazon sects were invited to a peace conference by Captain Kathryn Janeway of the U.S.S. Voyager. However, as the leader of the Trabe, who was also invited, attempted to assassinate the Kazon leaders, the talks failed.

In 2410, the following Kazon sects were encountered by the Delta Alliance: -Halik, -Mostral, -Nistrim, -Ogla, -Pommar and -Relora. Kazon-Ogla, Kazon-Relora and Kazon-Pommar sided with the Alliance, while the rest of the sects, led by Sessen, First Maje of the Kazon-Nistrim, sided with the Supremacy.

The Kazon have energy weapons, shields and tractor beams, but do not possess technology equal to the Federation, or even other species of the Delta Quadrant. Their sheer numbers and ferocity make them a threat, and they will often prey on smaller vessels or peaceful settlements.