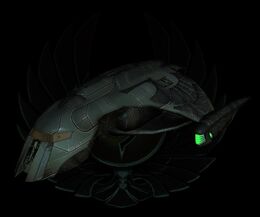 This article is about playable starship. For the NPC vessel, see Romulan Shuttle.

The Kestrel-class Runabout is a Tier 1 (Level 1) Small Craft which may be flown by Romulan Republic characters, as well as characters of any other faction. All faction restrictions of this starship can be removed by having a level 65 KDF character or by purchasing the Cross Faction Flying unlock from the Zen Store.

Players can obtain this starship from any Ship and Shuttle Requisitions officer for 34,250

The Kestrel-class Runabout is designed for longer-distance missions with a small crew. It's quick and mobile, but tougher and more dangerous than the Tiercel-class Shuttle.

The Kestrel-class Runabout has a cloak that allows the ship to cloak when not in combat, granting stealth and a damage bonus upon decloaking.

Romulan shuttles come with Standard Issue-S equipment and weapons that scale with the player. Additionally, shuttles have specialized beam arrays that have a 360-degree targeting arc. These cannot be equipped on any other type of vessel.