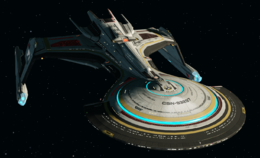 The Khitomer-class Alliance Battlecruiser is a Tier 6 Battlecruiser which may be flown by characters of any faction. This starship can be used from any level upon completion of the tutorial experience. As you level up, this ship gains additional hull, weapon slots, and console slots.

Players can obtain this starship by claiming it from the "Events" UI after completing the 10 Year Anniversary Event. Players who earn this ship through its associated Event may visit the “Reclaim Rewards” store, accessible via the "Events" UI, to reclaim this starship on any character on the account. The ship is currently unobtainable for those who missed the event, but may be added to Mudd's Market or the Phoenix Prize Pack in the future.

The Allied Cooperative Starship Development Board (ACSDB) is excited to announce their first vessel with unified design philosophies. While the ACSDB has been involved in the later design states of many new starship designs, this is their first jointly-designed starship built from the ground up. Its launch is a cause to celebrate - especially a starship such as this.

The Khitomer-class Alliance Battlecruiser has performed exceptionally in all of its trials, with its command and coordination abilities noted as exceptionally helpful in larger fleet actions. Its staying power and offensive capabilities in combat have clearly demonstrated that the cruiser and battleship expertise that went into the ship’s design has paid off well. Alliance engineers have noted that the success this design has achieved so far makes them optimistic for a unified future.

The Khitomer-class Alliance Battlecruiser has a cloak that allows the ship to cloak when not in combat, granting stealth and a damage bonus upon decloaking.

This starship displays its name in both Latin characters and Klingon pIqaD script, according to the following case-insensitive substitution cipher for letters:

To get the desired Klingon letter, input the Latin character below it. Note that the pIqaD comma and letters "ng" and "q" cannot currently be represented.

The following shows what Klingon characters will be shown beneath the entered Latin character.

Numerals are converted as expected, and the characters "-" and "_" will go unchanged.

Khitomer Alliance starships come with standard equipment and weapons of the lowest mark available at the ship's minimum rank. The items provided are appropriate to the type of vessel and its related playing style.

By using an [Experimental Ship Upgrade Token], the Khitomer-class Alliance Battlecruiser may be upgraded to T6-X, unlocking an extra ship device slot, universal console slot, and the ability to slot an extra starship trait.