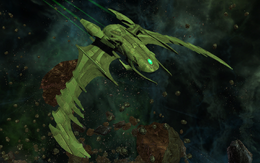 The Khopesh-class Tactical Dreadnought Warbird is a Tier 6 Dreadnought Warbird which may be flown by Romulan Republic characters, as well as characters of any other faction. All faction restrictions of this starship can be removed by having a level 65 KDF character or by purchasing the Cross Faction Flying unlock from the Zen Store. This starship can be used from any level upon completion of the tutorial experience. As you level up, this ship gains additional hull, weapon slots, and console slots.

. This ship can be purchased individually, or as part of the Scimitar Bundle [T6] for 6,000

. It is also available as part of the following: the Cross Faction Flagship Mega Bundle for 12,000

, and the Romulan Fleet Admiral Faction Pack for 5,000

In the late 24th Century, the I.R.W. Scimitar was developed covertly by a group of Remans under the command of Praetor Shinzon, a clone of Jean-Luc Picard.

Though equipped with numerous weapons and housing a contingent of Scorpion Fighters, the original Scimitar’s key feature was the ability to utilize thalaron radiation as a terrifying weapon. Shinzon first used a smaller thalaron radiation device to kill the entire Romulan Senate, and then relied on the Scimitar’s strength to back his overthrow of the Romulan government.

Praetor Shinzon attempted to deploy the Scimitar’s thalaron generator in the Battle in the Bassen Rift against the U.S.S. Enterprise-E and two Mogai-class Heavy Warbirds, but the Enterprise's crew prevented the weapon from being fired and destroyed the Scimitar – albeit at a heavy cost.

The design of the Romulan Flagship Dreadnoughts was greatly inspired by the Reman Scimitar-class Dreadnought Warbird; however the ships have a Romulan Republic aesthetic. These massive and imposing starships are durable and bristling with weaponry, but they are very slow to maneuver.

The Khopesh-class Tactical Dreadnought Warbird has a battle cloak that allows the ship to cloak during the combat, granting stealth and a damage bonus upon decloaking.

Purchasing the Khopesh Tactical Dreadnought Warbird also unlocks Romulan Drone Ship Frigates which can be equipped on any Romulan Dreadnought Warbird variant and Kelvin Timeline T'laru Intel Carrier Warbird. Romulan Drone ships utilize two unique pieces of technology. The first is Multi-Spectral Emitters, which allow them to take on the appearance of a limited variety of other types of ships. To support this technology, Romulan Drone ships are also equipped with Tri-Phasic Emitters. These change the frequency of the Drone Ship’s disruptors to emulate the weapon signatures of other weapon types, causing them to change both visually and functionally.

As a Romulan Warbird, the Khopesh-class Tactical Dreadnought Warbird comes with built-in Singularity abilities. These abilities do not automatically rank up when acquiring higher tier Warbirds. These powers build in severity based on the charge built up by the ship's Singularity Core.

By using an [Experimental Ship Upgrade Token], the Khopesh-class Tactical Dreadnought Warbird may be upgraded to T6-X, unlocking an extra ship device slot, universal console slot, and the ability to slot an extra starship trait.