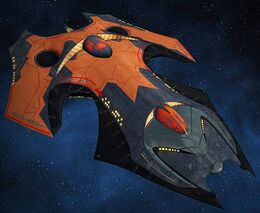 The Klein-class Temporal Destroyer is a Tier 6 Destroyer which may be flown by Starfleet characters and their allies, excluding Federation-aligned Romulan Republic characters. All faction restrictions of this starship can be removed by having a level 65 KDF character or by purchasing the Cross Faction Flying unlock from the Zen Store. This starship can be used from any level upon completion of the tutorial experience. As you level up, this ship gains additional hull, weapon slots, and console slots.

. The boxed ship is not bound and so may be traded to other players or bought and sold on the Exchange for energy credits under the name [Special Requisition Pack - Temporal Destroyer [T6]]. The choice box's contents depend on the player's faction; Federation players will receive the Klein Temporal Destroyer when opening it.

Klein Temporal Destroyer is a 29th century timeship from the Mirror Universe. As a successor to famous Mobius class vessel, Klein follows its steps with a tactical oriented setup and flexible seating options, with a few additions inherent to higher tier starships.

It can utilize the Temporal Operative bridge officer powers.

The ship can also equip other two consoles from the Temporal Fragmentation System Set, allowing the use of additional abilities:

The Klein-class Temporal Destroyer comes with an Experimental Weapon slot. This additional slot does not fit standard weapons. Unlike standard starship weapons, Experimental weapons are not affected by weapon firing modes, such as those granted by bridge officer abilities.

By using an [Experimental Ship Upgrade Token], the Klein-class Temporal Destroyer may be upgraded to T6-X, unlocking an extra ship device slot, universal console slot, and the ability to slot an extra starship trait.