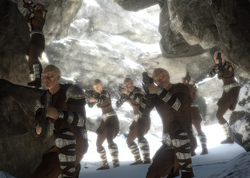 The Klingon 2256 (comprised of "Mo'Kai Klingons", "D'Ghor Klingons", and "Klingon 2256 (House Kor)") faction is the Klingon Empire from the first Klingon-Federation War of 2256-57. They are distinguishable from regular Klingon mobs by their Klingon (Discovery) aesthetic.

The Klingon Empire of 2256 was highly decentralized, built around rival houses competing for dominance. T'Kuvma began the war with the Federation hoping to unite these houses, however his dream would not be achieved until the war's end.

T'Kuvma's sister, J'Ula, leader of House Mo'Kai, used the classified data stolen during the raid on Federation starship U.S.S. Glenn to create a powerful weapon based on mycelial transportation technology. She attempted to use this weapon during an attack on Starbase 1, but it malfunctioned, sending multiple Klingon and Starfleet vessels into the 25th century.

Among these ships was the I.K.S. Lukara, J'Ula's flagship. When she learned her house was destroyed in a blood feud with House B'vat a few decades prior to her arrival to the future, J'Ula started plotting revenge, planning to overthrow J'mpok and take over the Klingon Empire. The Federation, Klingon Empire, and the Romulan Republic, aware of the potential threat J'Ula and her warriors represent to the stability of their alliance, started developing training scenarios to prepare their officers for battle against them.

In 2411, a new Klingon Civil War broke out following J'Ula's arrival to the 25th Century, where she addressed the High Council on J'mpok's dishonorable deeds. With the Khitomer Alliance realizing J'mpok's dishonor, they battle on J'Ula's side during the final battle of Qo'noS. The war concluded with J'mpok falling to J'Ula in a duel to the death in the Great Hall during the final battle of Qo'noS, but J'Ula passes the Chancellorship to L'Rell, who was cloned by Tenavik and the monks on Boreth as a replacement of J'mpok, instead.