You may be looking for the playable version of the Klingon Battle Cruiser. 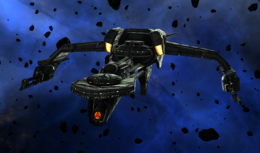 The Klingon Battle Cruiser is a cruiser-level vessel used by the Klingon Empire. Though slower and less maneuverable that the Raptor Escort, it has a stronger hull. The battle cruiser is a quintessential Klingon design, and is considered the primary warship of the Klingon Defense Force.

The name and appearance of the Battle Cruiser depends on its level, though its armament and abilities remain the same. There are seven variants: K'Tanco, K't'inga, K't'inga refit, Koro't'inga, Vor'cha, Tor'Kaht, and (in the 23rd Century only) D7-class. The player may occasionally encounter more than one variant in the same mission.