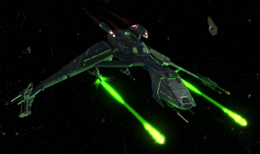 This article is about NPC vessel. For playable versions, see Klingon Bird-of-Prey.

The Klingon Bird-of-Prey is a small, agile frigate deployed by the Klingon Defense Force in a wide variety of combat scenarios. This extremely versatile starship excels in raids and hit-and-run encounters, due to its high maneuverability and cloaking device.

The appearance of the Bird-of-Prey depends on its level, though its armament and abilities remain the same.