Edit
watch 02:53
GTA: The Criminal Enterprises - The Loop
Do you like this video?
Play Sound
Klingon Empire 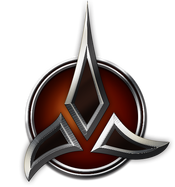 The Klingon Empire is the official state of the Klingon people, originally founded by the legendary Klingon Warrior Kahless the Unforgettable. The Empire is lead by the Chancellor of the High Council and its primary military branch is the Klingon Defense Force.

Klingon culture values tradition, ritual, and above all, honor. All Klingons are expected to become warriors, and those who are unable to fight are obliged to commit ritual suicide. While Klingons are not religious and do not have deities, there is a strong belief in the afterlife. Klingons who die with honor go to Sto-vo-kor, while those who are dishonored are taken to Gre'thor on the Barge of the Dead.

In the 9th Century, Qo'noS was ruled by the tyrant Molor. Kahless the Unforgettable rose up as a champion of the people to fight him. He forged the Sword of Kahless and defeated Molor, banishing him to Gre'thor. Kahless unified the Klingons, establishing the Empire, the importance of the warrior caste, and the tenets of modern day Klingon society. Kahless went on to defeat the Fek'Ihri, wretched souls of the soldiers that pledged fealty to Molor in life, before departing for Sto-vo-kor. Later, in the 14th century, Qo'noS was sacked by the Hur'q and the Sword of Kahless was stolen.

In the 22nd Century the Empire came into contact with the United Federation of Planets. The relations between the two powers deteriorated, leading to a brief open war in the 23rd Century. The destruction of Praxis in 2293 turned the tides and led to the Khitomer Accords, which would culminate in a firm Klingon-Federation alliance in the 24th Century.

Since the events of Star Trek: Nemesis, the Klingon Empire has expanded its territory. Under Martok they formed an alliance with the Orion Syndicate under Melani D'ian, bringing them into the Empire as a vassal. Later, hardliners led by J'mpok pushed for an invasion of the Gorn Hegemony to counter Undine infiltration. When Martok refused, J'mpok challenged and defeated him for leadership of the Empire. Both these annexations were condemned by the Federation, straining the relations between the two powers.

In 2405, J'mpok's rekindled an ancient claim over the Hromi Cluster, held by the United Federation of Planets. The Federation's refusal sparked a new Federation-Klingon War that would last until 2410.

In 2411, a new Klingon Civil War broke out following J'Ula's arrival to the 25th Century, where she addressed the High Council on J'mpok's dishonorable deeds. The war concluded with J'mpok falling to J'Ula in a duel to the death in the Great Hall during the final battle of Qo'noS, but J'Ula passes the Chancellorship to L'Rell, who was cloned by Tenavik and the monks on Boreth as a replacement of J'mpok, instead.

The Empire is a feudal monarchy, where influence and allegiance is divided into great houses, such as that of B'vat. Though the official head of state is the Emperor Kahless, the real executive power is held by the Klingon High Council led by the Chancellor, formerly J'mpok, currently L'Rell in 2411. Throughout the Empire, the High Council's will is represented by local governors. The Klingon military, the Klingon Defense Force, also holds certain power and political influence, as it is its Commanders and Generals on who any Chancellor's authority relies.