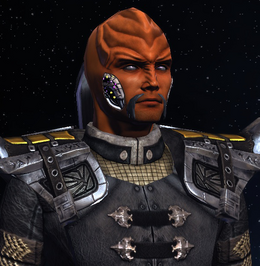 The Klingon Android Bridge Officer Candidate is a Very Rare reward for players with the Lifetime Subscription. Once eligible, players can obtain this officer from V'Qlar at the barracks of First City (found under the Special Officers section). Unlike other Bridge Officers, they are not tradeable and cannot be sold on the Exchange.

This is a KDF Warrior. There is also a Starfleet Android Engineering Officer Candidate for the Federation.

NOTE: Originally, this Boff was an Engineering Male, but since the 1/17/2013 patch, they are now available as any gender, and any career.