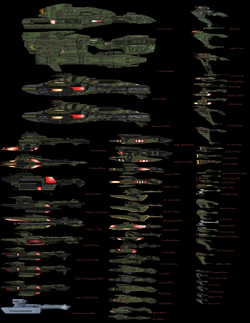 Some of the Klingon starship classes available to Klingon Defense Force players.

There is a broad range of Klingon playable starships currently available in Star Trek Online. While all Klingon starships are principally warships, they can further be divided into different categories, based on Bridge Officer station layout, number of weapon slots, and access to various built-in abilities, such as Experimental Weapon, Secondary Deflector, cruiser commands, Hangar Bay slots, etc.

A B'rel Bird-of-Prey, one of the most iconic Klingon ships in use since the 23rd century.

Klingon Raiders, more commonly referred to as Birds-of-Prey, represent a long standing Klingon design of scout, patrol and reconnaissance ships. Small, fast and maneuverable, they fill a variety of roles for the Empire. They're vulnerable when cloaked, but their speed and agility make them useful as hit-and-run warships.

In Star Trek Online, Klingon Defense Force players can choose from a wide selection of Birds-of-Prey, from Tier 1 to 6.

All Raiders have mostly Universal bridge officer seatings, which further increases their versatility. As a trade-off, they usually have one less Weapon slot than the Escort class of the same tier.

Similar to Escorts, Raiders come with an Experimental Weapon slot. Unlike standard starship weapons, Experimental Weapons are not affected by weapon firing modes or enhancements in most cases, such as those granted by bridge officer abilities or specific consoles. Nevertheless, they provide an additional buff to an already impressive weapon arsenal.

The M'Chla Bird-of-Prey, as seen in Star Trek: Discovery.

All Raiders also come with the following built-in abilities:

(Provides a boost to damage when striking an enemy's rear arc)

(Allows the player to cloak during combat, gaining stealth and a damage boost upon decloaking)

Some Klingon Raiders, such as B'rel Bird-of-Prey Retrofit (T5) and Kor Bird-of-Prey (T6) come with a built in Enhanced Battle Cloak, allowing them to fire torpedoes and launch mines while under cloak.

Raptors bridge the gap in playstyle between Raiders and Battlecruisers.

Raptors represent a line of Klingon starships comparable to Federation Escorts. They are powerful, medium-sized warships with good maneuverability built purely for firepower.

Players can choose between various Raptors from Tier 2 to 6. Aside from modern Klingon designs, players also have access to Ferasan and Lethean Escorts, built by the allies of the Klingon Empire, and Discovery-era House Mo'kai Strike Wing Escorts.

Raptors and Escorts come with an Experimental Weapon slot.

All Raptors come with a built-in Cloak.

All Raptors have 2 device slots and gain a bonus +15 Weapons Power.

The Negh'Var Battle Cruiser served as the flagship of Klingon Imperial Fleet during the Dominion War.

Battle Cruisers are a type of playable starship often utilized by the Klingon Defense Force. In comparison to a Raptor, Battle Cruisers carry slightly more in the way of firepower due to their increased size but take a hefty reduction to maneuverability in the process. They do however have improved warp cores allowing them the luxury of more power to their systems. They also have a much stronger hull, and therefore can take more damage before being destroyed.

Players can choose between a wide selection of Battle Cruisers, ranging from Tier 2 to Tier 6.

All Battle Cruisers come with a built-in Cloak.

They also have access to three cruiser commands, as opposed to the four available to conventional Cruisers:

Although they lack the conventional Cruiser's Attract Fire command for crowd control, they can equip Dual Cannons in exchange.

Some ships, such as Command Battlecruisers and Dreadnought Battlecruiser, trade Strategic Maneuvering for a single Hangar Bay slot.

Miracle Worker Cruisers, the dream of the modern day Engineer.

Cruisers are large, powerful vessels. Though typically flanked by escorts in combat, cruisers can deliver high damage with their large warp cores and broad complement of weapons. Klingons rarely utilize them; Battlecruisers, with their higher maneuverability and tactical BOff layout and console configuration, tend to be a more popular choice.

The only available Klingon Cruisers are the Miracle Worker Cruisers.

Similar to Battlecruisers, all Cruisers come with a built-in Cloak. However, they cannot equip Dual Cannons.

They also have access to all four cruiser commands:

Flight Deck Carriers are an Orion contribution to the Klingon Defense Force.

The Sarcophagus Dreadnought Carrier, as seen in Star Trek: Discovery.

A recent endeavor, Carriers are now the pride of the Klingon Defense Force. Although these gigantic starships can serve as warships, they are also capable of providing a support role to other Klingon Empire vessels.

The first Carrier KDF players can acquire is the Tier 5 Vo'quv Carrier.

All Carriers come with two Hangar Bay slots and built in Carrier commands which allow the player to control carrier pets in space. They also come with a built in Subsystem Targeting.

At the same time, the Orion Syndicate has produced a number of Flight Deck Carriers, combining the aspects of a battle cruisers and carriers together. These starships lack Subsystem Targeting, but have access to two cruiser commands:

All of these ship types can equip Dual Cannons.

Destroyers are mainly found in the Imperial ranks in the form of Nausicaan vessels.

Destroyers are powerful, medium-sized warships, generally of Nausicaan design. They are more agile and have greater offensive strength than Raptors. Warships trade experimental weapon for another weapon slot.

Similar to Klingon Raptors and Raiders, all high tier Destroyers come with an Experimental Weapon slot.

Unlike Raptors, Destroyers usually have 3 device slots and gain +10 to +15 bonus Weapons Power, as well as +5 to another Power system (often Engine Power).

Note: Ketha Recon Raptor (T6) is officially classified as a Raptor, but has a Starship Mastery package of a Destroyer.

Gorn Support Vessels fill in the role of Science Vessels in the Defense Force armada.

Support Vessels are very similar in specification to Federation Science Vessels. They specialize in debuff and control powers, and work best when supporting other vessels in teams.

Most Support Vessels are of Gorn design, but there are several Klingon designs available (either from the Zen Store, Lobi Crystal Consortium, or Lock Boxes).

All Support Vessels also come with the following built-in abilities:

(Improves Damage and Power Drain against the targeted enemy, or improves any heal directed towards the targeted ally)

Compared to full-sized starships, Small Craft such as shuttlecraft and fighters have significantly less hull, shields, weapons, bridge officers, consoles, and crew. However, these craft have very high maneuverability and turn rate.

Small Craft are automatically used, when a mission requiring the player to be in such a vessel is launched. Alternatively, it is possible to always fly your small craft by selecting it as your "active" ship.