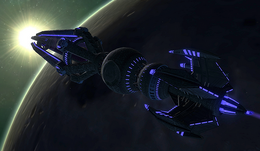 This page is for the playable starship. For the NPC vessel, see K.I.V. Annorax.

The Krenim Annorax-class Science Dreadnought is a Tier 6 Science Dreadnought which may be flown by characters of any faction. This starship can be used from any level upon completion of the tutorial experience. As you level up, this ship gains additional hull, weapon slots, and console slots.

Players can obtain this starship from a [Special Requisition Choice Pack - Tier 6 Promotional Ship Choice Pack], which has a ultra rare chance to drop from a [Promotional R&D Pack] or a [Promotional Duty Officer Pack]. This box is bound to you until a ship is chosen. The boxed ship is not bound and so may be traded to other players or bought and sold on the Exchange for energy credits under the name [Special Requisition Pack - Krenim Annorax Science Dreadnought [T6]].

Originally designed by the Krenim to house a devastating temporal weapon that could alter timelines, the Krenim Annorax Science Dreadnought is a menacing and an incredibly durable science vessel. However, it is not very agile. It features a built in Chroniton Lance that can be used to cause devastating damage to enemies as well as render them helpless for a short time.

Considered both a Temporal Starship and a Krenim Coalition Vessel, the Krenim Annorax Science Dreadnought can equip consoles from both the Temporal Fragmentation System Set and the Coalition Timeline Manipulation Set.

The Krenim Annorax Science Dreadnought possesses a built-in Chroniton Lance. This devastating weapon is capable of dealing tremendous amounts of antiproton damage, holding affected targets and reducing the speed at which their abilities recharge.

The Advanced variant of the Krenim Heavy Raiders can be obtained from the Dilithium Store, while the Elite variant is obtainable from the Fleet Starbase with unlocked Tier V Communications Array.

By using an [Experimental Ship Upgrade Token], the Krenim Annorax-class Science Dreadnought may be upgraded to T6-X, unlocking an extra ship device slot, universal console slot, and the ability to slot an extra starship trait.