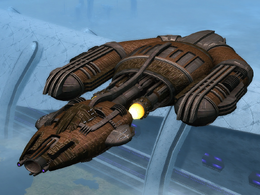 This article is about the playable starship. For the NPC vessel, see Krenim Warship.

The Krenim Imperium Warship is a Tier 6 Warship which may be flown by characters of any faction. This starship can be used from any level upon completion of the tutorial experience. As you level up, this ship gains additional hull, weapon slots, and console slots.

Players can obtain this starship as a ultra rare drop from the [Infinity Lock Box]; it comes in an [Infinity Prize Pack - T6 Ship] choice package, which is bound to you until a ship is chosen. It can also drop from the older [Year of Hell Lock Box]. The boxed ship is not bound and so may be traded to other players or bought and sold on the Exchange for energy credits under the name [Special Requisition Pack - Krenim Imperium Warship [T6]].

This ship could also be purchased as an account-unlock from the Zen Store as a possible choice from the Mudd's Lost in the DQ Choice Pack as part of "Mudd's Market", available from March 10th, 2022. Like all items in the Market, the Bundle periodically goes on massive discounts (upwards of 50% during special promotional sales).

Recently, contact was made with a Krenim colony which had been temporally phased to escape the wrath of the Vaadwaur. These survivors and their allies in the Zahl and the Nihydron have formed a new Coalition to withstand the dangers they face, and have together promised their aid to the Alliance of Federation, Klingon and Romulan representatives attempting to end the Iconian threat. The Krenim Coalition will use time itself as a weapon against their enemies.

The Krenim Imperium Warship is a formidable starship with incredible offensive capabilities. While it is slower and less maneuverable than many destroyers and escorts, it makes up for this with greater weaponry and more durable hull and shielding.

This ability is part of the Coalition Timeline Manipulation Set, which also includes [Console - Universal - Temporal Shielding Matrix]. This console is obtainable with the Zahl Heavy Cruiser, but can also be equipped on the Krenim Imperium Warship. If both consoles are equipped, an additional passive bonus will be unlocked.

By using an [Experimental Ship Upgrade Token], the Krenim Imperium Warship may be upgraded to T6-X, unlocking an extra ship device slot, universal console slot, and the ability to slot an extra starship trait.