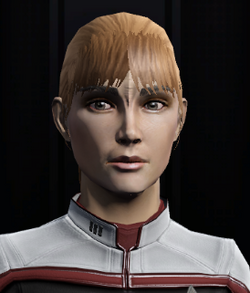 The Ktarians are a humanoid race native to the planet Ktaris. They are a member of the United Federation of Planets.

Pure Ktarians are similar to humans, though they have domed foreheads and yellow eyes with horizontal slit pupils. Ktarians are also known to have patches of scales in a few places.

Human/Ktarian hybrids (such as Commander Wildman) are more similar to their human side, but have an unusual trait that neither parent does, a ridge of spikes in the center of the forehead.

Ktarians are not currently available as player characters, Bridge Officers, or Duty Officers.

It should be noted that Commander Naomi Wildman does not have the tell-tale cranial spikes on her forehead in the game. This is due to this appearance feature not being available in-game at this time. No in-world explanation for this inconsistency has been given.