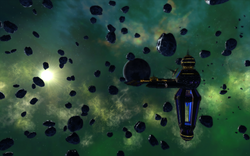 Kyana Research Station (also called Krenim Assembly Facility or Krenim Research Facility) is a Krenim space station in the asteroid belt of the Kyana System of the Alsuran Sector. It was constructed in 2410 as a joint effort by the Krenim and the Iconian Resistance. It is subdivided into four sections: The central, research, development, and conferences areas.