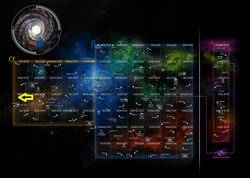 The Lahra System is a system located in the Arawath Sector of the Alpha Quadrant.

The two planets of the Lahra system are in close orbit around a Class B star with a core temperature of 27,500 degrees Kelvin. Lahra Prime is L Class, but it was considered too cold and mountainous to be suitable for colonization before the Dominion War.

Now, however, the Cardassian government wants to encourage new settlements in the region. In 2407, it began offering land grants to settlers willing to move to the planet.