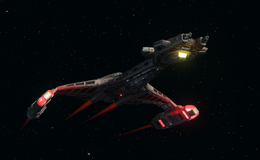 The Legendary Vor'cha-class Command Support Battlecruiser is a Tier 6 Battlecruiser which may be flown by Klingon Defense Force characters, including Klingon Empire-aligned Romulan Republic and Dominion characters. All faction restrictions of this starship can be removed by having a level 65 KDF character or by purchasing the Cross Faction Flying unlock from the Zen Store. This starship can be used from any level upon completion of the tutorial experience. As you level up, this ship gains additional hull, weapon slots, and console slots.

Players can obtain this starship from the Zen Store as part of the 2021 Anniversary Legendary Bundle for 25,000

The Vor’cha-class Battlecruiser was the backbone of the Klingon order of battle for many decades, entering into service in the mid-24th century and earning glory as a powerful ship of the line during the campaigns against the Cardassians, Federation, and Dominion in the early 2370s. Its thick armor and heavy weaponry have made it a fearsome combatant and kept it in service well into the first decade of the 25th century.

The Legendary Vor'cha-class Command Support Battlecruiser has a battle cloak that allows the ship to cloak during combat, granting stealth and a damage bonus upon decloaking.

By using an [Experimental Ship Upgrade Token], the Legendary Vor'cha-class Command Support Battlecruiser may be upgraded to T6-X, unlocking an extra ship device slot, universal console slot, and the ability to slot an extra starship trait.