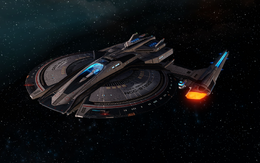 For other versions, see ship comparison. For the NPC version, see Walker class.

The Legendary Walker-class Light Battlecruiser is a Tier 6 Battlecruiser which may be flown by Starfleet characters, including Federation-aligned Romulan Republic and Dominion characters. All faction restrictions of this starship can be removed by having a level 65 KDF character or by purchasing the Cross Faction Flying unlock from the Zen Store. This starship can be used from any level upon completion of the tutorial experience. As you level up, this ship gains additional hull, weapon slots, and console slots.

Players can obtain this starship from the Zen Store for 12,000

With the shattering of the Klingon Empire, the Federation's engineers found their projects with the Khitomer Alliance on hold or cancelled. However, Starfleet is unlikely to let talented engineers go to waste, and sent them to work on the Yard 39 project, resurrecting the ships of the 2250s with modern technological capabilities. The first ship to result from that hard work is the Walker-class Light Battlecruiser. The Walker-class is a fairly famous ship in Starfleet history, and previous attempts at resurrecting her have been made, including the Georgiou-class. However, this is the first ship to marry her classic form and functionality with 2411's latest, bleeding edge tech. The captains lucky enough to command her will explore the frontiers of the galaxy like never before.

By using an [Experimental Ship Upgrade Token], the Legendary Walker-class Light Battlecruiser may be upgraded to T6-X, unlocking an extra ship device slot, universal console slot, and the ability to slot an extra starship trait.