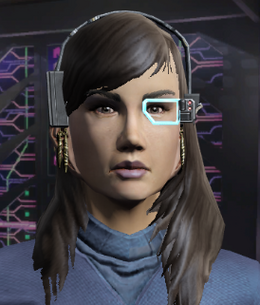 Loriss is a series of Vorta diplomats in service of the Dominion in 24th and 25th century. Like other Vorta, Loriss is a clone; by 2410, four copies are known to have existed, two of which were encountered by the Alliance.

Loriss 3[1], cloned in the Gamma Quadrant in the 24th century, commanded the Jem'Hadar fleet which was temporally displaced from 2374 to 2409 by the Prophets.

Following her return to the Gamma Quadrant, Loriss 3 was presumably terminated. Loriss 4, her successor, was assigned to Ambassador Odo.

In 2410, following the Hur'q return, Dominion forces led by Odo and Loriss 4 crossed the Bajoran Wormhole to assist Alliance forces in the battle over Bajor.

Loriss 4, located at the Dominion Embassy on the DS9, acts as a bridge officer vendor for