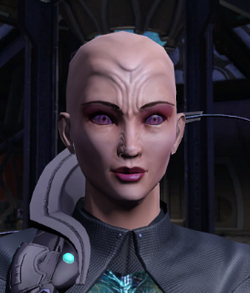 The Lukari are a humanoid species inhabiting a moon orbiting a gas giant in the Lukari System in the Alpha Quadrant. Before settling on their current homeworld, Lukari used to be members of the Kentari species who followed teachings of scholar Lukar. Unlike the rest of the Kentari who were obsessed with power and material wealth, Lukari stood against those things. The two groups fought in a civil war which ended when the Lukari were forced into self-exile.

Lukari are a reclusive but friendly people with pink skin tones and violet eyes. They have cranial ridges, as well as ridges along the sides of the nose. Physically, they are stronger than they look, much like Vulcans or Romulans. In addition, they have purple blood.