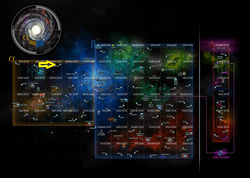 The Lukari System, also designated as Hrith System by Tzenkethi, is a system located in the Maxia Sector of the Alpha Quadrant and home to the Lukari civilization.

This system boasts a bright B1V type main sequence star that has several gas giants. No rocky worlds exist within the habitable zone. As a consequence, this system has remained a low priority for exploration, due to the low chances of indigenous life.