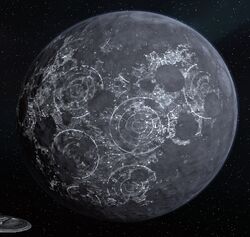 Luna (also The Moon) is Earth's sole natural satellite. It is heavily populated, to the extent that the majority of the surface is covered with a contiguous belt of cities.

Luna was observed from Earth from ancient times. The first manned mission to the satellite took place in 1969, while Lunar Colonies were established in the late 21st century. By the late 24th century more than 50 million people lived on the Moon, in places like Tycho City, New Berlin and Lake Armstrong.