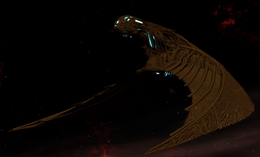 This article is about the playable starship. For the NPC vessel, see Klingon Bird-of-Prey (2256).

The M'Chla-class Pilot Bird-of-Prey is a Tier 6 Raider which may be flown by Klingon Defense Force characters, including Klingon Empire-aligned Romulan Republic and Dominion characters. All faction restrictions of this starship can be removed by having a level 65 KDF character or by purchasing the Cross Faction Flying unlock from the Zen Store. This starship can be used from any level upon completion of the tutorial experience. As you level up, this ship gains additional hull, weapon slots, and console slots.

under the name M'Chla Pilot Bird-of-Prey (T6). This ship can be purchased individually, or as part of the Discovery Operations Pack for 12,000

After Burnham's War ended and the Klingon Empire united under the leadership of Chancellor L'Rell, the 24 great houses began to consolidate their technology and the Klingon Imperial Fleet emerged as the united empire’s military. The technology base and method of each house differed wildly at the time, and to facilitate integration and mobilization under a broad imperial banner, KIF engineers made an effort to standardize and simplify the technology used in Klingon starships. Along the way, some of the craftsmanship and technology unique to each house was lost in favor of starships that could be quickly built by any yard in the Empire.

As Starfleet has rediscovered relics from its past, so too have Klingons begun to look at the accomplishments of the 23rd century great houses. While acknowledging that unification was an important step for the Klingon people, many are able to appreciate their own relics of a bygone era and find renewed pride in the unique identity imbued into the ships of their house.

To that end, the High Council has ordered its generals to set aside several drydocks for the refit or construction of replicas of these old ships, using modern technology to maintain their operational relevance.

Some concepts are timeless, and the Birds-of-Prey are such concept. The core is elegant in its simplicity - a ship that can appear anywhere, accomplish its goal, and quickly vanish. This trends it towards many of the same directions - a lightweight, highly mobile ship with heavy guns and powerful stealth systems, and a need for flexibility to adapt to the specific missions at hand. The M'Chla-class Pilot Bird-of-Prey is no different in its goals than the 23rd century Bird-of-Prey design that had inspired it, but is all the more fearsome with all the improvements that time and alliances have brought it.

The M'Chla-class Pilot Bird-of-Prey has a battle cloak that allows the ship to cloak during combat, granting stealth and a damage bonus upon decloaking. It has a unique cloaking effect as seen on Star Trek: Discovery.

The M'Chla-class Pilot Bird-of-Prey comes with an Experimental Weapon slot. This additional slot does not fit standard weapons. Unlike standard starship weapons, Experimental weapons are not affected by weapon firing modes, such as those granted by bridge officer abilities.
This vessel comes with the unique [Hypercharged Field Projector] which deals Electrical Damage in a 360° targeting arc.

By using an [Experimental Ship Upgrade Token], the M'Chla-class Pilot Bird-of-Prey may be upgraded to T6-X, unlocking an extra ship device slot, universal console slot, and the ability to slot an extra starship trait.

The following table compares various T6 Raiders that may be flown by KDF captains.