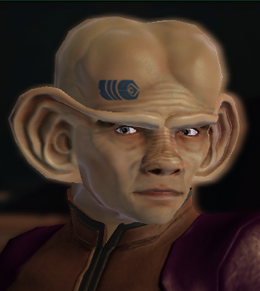 Madran is a Ferengi entrepreneur who, in 2387, acquired mining rights in the Hfihar System. He enlists hundreds of Romulan refugees, who he treats little better than slaves. In 2411, following the defeat of Hassan the Undying, he took over in running the Shangdu bar and arena on Nimbus III under 'Madran Enterprises'.

[Madran, desperate] "My dear friend Kuumaarke, just think of how much I can help!"
[Kuumaarke, firm] "I try not to think about you at all, Madran."

- Kuumaarke, to Madran in the Lukari System ( “Echoes of Light”)