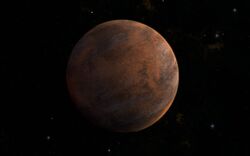 Mars is the fourth planet of the Sol System, and the location of the Utopia Planitia Shipyards, Starfleet's primary starship construction and repair facility. Mars is colonized by humans and has two asteroid-like moons, Phobos and Deimos.

The exploration of Mars by humans started in the mid-20th century, while observations of the planet from Earth were made for several centuries before that. By the 2030s, manned missions to Mars were conducted.

The Martian colonies were established in 2103, while later the Utopia Planitia Shipyards became one of the most important construction sites of Starfleet starships.

In 2385, a deadly attack on Mars was launched by Synths which destroyed the shipyards and left the surface burning as late as 2399. However, the yards were rebuilt prior to 2409 and are now defended by the 3rd fleet.