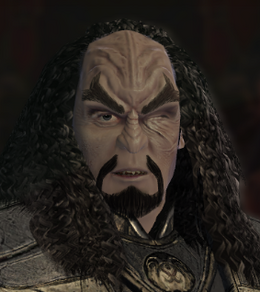 Being born in the poor Ketha Lowlands on Qo'noS, Martok became the head of the House of Martok and worked his way up the ranks of the Klingon military, finally serving as Chancellor of the Klingon High Council from 2375 until his apparent death at the hands of J'mpok in 2393. In 2410, it is revealed that Torg intervened after J'mpok delivered what should have been the killing blow, taking Martok prisoner in the Son'a Facility 617 at the Briar Patch.

Following his liberation, he does not wish to seek Chancellorship from J’mpok, retaining his old rank of General instead and actively joining the Alliance in their fights against numerous current threats and enemies.