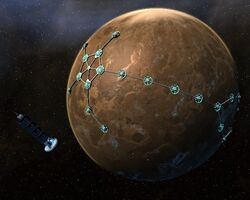 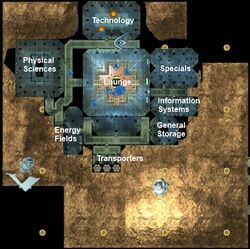 Until its removal from the game on 17 July 2014, Memory Alpha was the center for crafting for Federation players. The NPCs at Memory Alpha introduce the player to crafting, and enables players to create weapons and equipment by collecting data samples and using one of the research stations provided.

The Lounge, also known as General R&D, is located in the central plaza. In addition to the main research station, players will find the bank, the exchange, and mail consoles.

The general storage area is to the south east of the facility, and is where anomalous data samples are kept.

The area to the south-west of the lounge is Energy Fields R&D, where engineering research is carried out.

The area to the west is occupied by Physical Sciences R&D, where science research is done.

The area to the north of the facility is devoted to the technology specialism, in which tactical research is performed.

How to Start Crafting[]

The player must first gather data samples either in space or while on away missions. These are then used to create the basic ingredient in each crafting recipe; a schematic. With a schematic of the correct type and sufficient data samples, the player can then fabricate items at one of the research consoles. Each item crafted will increase the player's crafting skill, which unlocks more advanced crafting recipes.