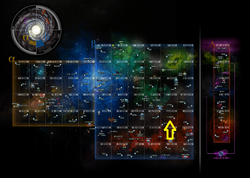 The Mempa System is a system located in the Mempa Sector of the Beta Quadrant.

The Mempa system hosts nine planets, many of which have seen staging grounds of military operations. All of the planets orbit a binary star system consisting of a G-type yellow star and a K-type orange star. Due to the radiant output of the pair of stars, most of the planets are located at a significant distance from the system's center of gravity. In spite of its location on the border of Klingon space, the Mempa system hosted several battles during the Klingon civil war of 2368, including a punishing defeat to the forces of then-Chancellor Gowron. These military actions forced the Klingon Empire to abandon active patrols and posts in the system, which led to an influx of scavengers, malcontents, and criminal elements, scattered across the various planets in isolated bases.