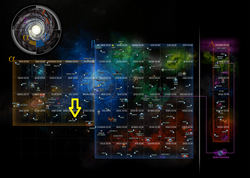 Minos Korva is one of the Federation worlds that the Cardassian Union attempted to conquer in the Federation-Cardassian War of the 24th century. Many of the planet's 2 million residents evacuated during the Dominion War, but the population rebounded after the Treaty of Bajor was signed. Now more than 1.6 million people live on the world. The Federation Science Council maintains a research station on the planet.