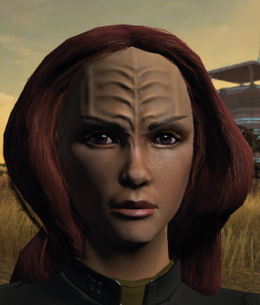 Lieutenant Commander Miral Paris is a third-generation Starfleet officer and chief of security & second officer aboard the U.S.S. Kirk. The child of her Human father Tom Paris, and her half Klingon mother B'Elanna Torres, Miral is a Human/Klingon (3/4 Human, 1/4 Klingon) hybrid. Some Klingons believe she is the Kuvah'Magh, the chosen one to lead the Klingon Empire back to glory.

Miral was born in 2378 on the U.S.S. Voyager shortly before it reached Earth after a long journey home from the Delta Quadrant. She is named after her maternal grandmother.

In 2398, Miral entered Starfleet Academy. When asked about the savior figure some Klingons see in her, she replied: "I'm a student, not a savior [...] Allow me and my classmates peace and privacy."

In 2402, her religious significance haunted her again, when a Klingon sect believing in the Kuvah'Magh illegally boarded the U.S.S. Pike which Cadet Paris was assigned to for her senior training cruise.

By 2409, Miral was promoted to Lieutenant and assigned to the U.S.S. Kirk as chief of security.