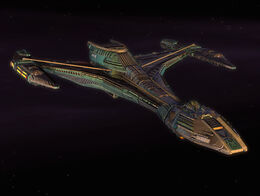 The Mirror Somraw-class Raptor Retrofit is a Tier 5 (Level 40) Raptor which may be flown by Klingon Defense Force characters and their allies, excluding Klingon Empire-aligned Romulan Republic characters. All faction restrictions of this starship can be removed by having a level 65 KDF character or by purchasing the Cross Faction Flying unlock from the Zen Store.

Players can obtain this starship as a ultra rare drop from the [Infinity Lock Box]; it comes in an [Infinity Prize Pack - T5 Ship] choice package, which is bound to you until a ship is chosen. It can also drop from the older [Undine Lock Box]. The boxed ship is not bound and so may be traded to other players or bought and sold on the Exchange for energy credits under the name [Special Requisition Pack - Mirror Universe Somraw Raptor Retrofit].

The Tholian Assembly has been utilizing multi-dimensional phasing technology to penetrate the barriers of the space-time continuum, resulting in retrieval of technology, weapons, personnel and even entire starships, pulled from distant times and places. Ripples from their activity have caused uncontrolled temporal anomalies to appear up to several hundred light years from their source.

Daredevil profiteers from the Lobi Crystal Consortium have set up an intricate supply chain dedicated to seeking out these uncontrolled ripple anomalies, and exploiting them to retrieve goods that they can then sell to the highest bidders. Starfleet, Klingon Defense Force and Romulan Republic all have an obvious interest in these valuable time-displaced artifacts, for it may be that the fate of time itself will be in the hands of the faction that controls them.

One of the recovered starships is the Klingon Somraw-class Raptor Retrofit, a Mirror Universe variant of the Empire's own Raptor Retrofit. It features a Lt. Commander Science station instead of the Lt. Commander Tactical on the Prime Universe counterpart, switches the Ensign Engineering for an Ensign Tactical, and switches an Engineering Console for a Science Console, but otherwise is statistically identical.

The Mirror Somraw-class Raptor Retrofit has a cloak that allows the ship to cloak when not in combat, granting stealth and a damage bonus upon decloaking.

The Mirror Somraw-class Raptor Retrofit comes with an Experimental Weapon slot. This additional slot does not fit standard weapons. Unlike standard starship weapons, Experimental weapons are not affected by weapon firing modes, such as those granted by bridge officer abilities.