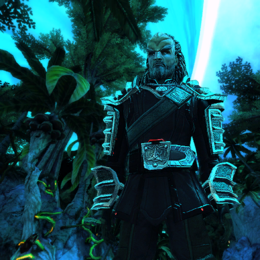 In Alpha the player has to recover vital data from a Bird-of-Prey crashed on a mysterious jungle planet.

Located in the Hyralan Sector of the Psi Velorum Sector Block, the Orith System is dominated by Orith Prime, a large hydrogen-helium gas giant with significant amounts of chlorine and sulfur in its atmosphere. In close orbit with Orith Prime is Orith II, a small M-Class planet covered in jungles and thick vegetation. Empire scientists say that the atmosphere on Orith II is not hazardous, although they speculate that the influence of the gas giant has led to unusual aberrations in the planet's ecosystem.

Intelligence reports indicate that Nausicaan pirates have taken up residence in clusters of asteroids drawn into orbit by Orith Prime's massive gravity well. Captains in the region are advised to use caution when exploring the region.

One of the vessels that took part in the raid on Utopia Planitia has gone missing in the Orith System... in Romulan space.

We received a brief burst from the ship's emergency transponder, but then it went silent. If this was a Romulan attack, we have a new enemy to face in this war.

Command has ordered us to go to the last known location of the ship. Once there, we are to find the missing vessel and recover the critical data if possible.

Report to the Orith sytem, which is in the Hyralan Sector of the Psi Velorum Sector Block, and recover the data from a missing Bird-of-Prey.