Mission: Bringing Down the House

Bringing Down the House 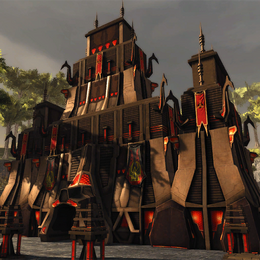 In Bringing Down the House the player's assistance is requested in defending the House of Martok from an assassin.

Lady Sirella of the House of Martok requests the player's and K'mtar's help as she suspects an assassin being about to strike against her house. Actually the Romulan Tarsen, who is collaborating with the House of Torg, is discovered and eventually manages to kill M'ven, son of Drex and Sirella's grandson, on Forcas III.

Sirella, lady of the House of Martok, has requested that you meet her in the Ketha Lowlands.

She did not explain why she wanted to see you, but I expect that she has some task she would like completed. The House of Martok has lost much prestige since I took the Chancelor's seat, but they still have many allies among the KDF and I am loathe to reject Sirella's request without a good reason.

Gaining the favor of the House of Martok could serve you well, but remember that they have many enemies. I Harbor no ill toward Sirella, but do not get caught up in her vengeance against me. It would not be in your best interest.