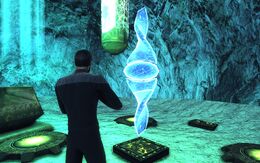 Ambassador Surah is recalling the player to Defera. Breen have been sighted at the Preserver ruins again. When the player reaches the ruins, the Breen are already gone. By entering a sequence of geometric patterns known from a Preserver site in the Begen System, a holographic piece of a star chart is unlocked. Meanwhile, Breen starships have been detected in orbit of the planet. The away team returns to the ship. The Breen ships are closing in on the ship in order to retrieve the discovered star chart.

After the skirmish with the Breen, the computer finishes the analysis of the star chart, pointing to the S'hinga System. There, a gaseous anomaly triggers the crew's interest. An analysis of the gas cloud reveals that its molecular structure was artificially engineered to give away another point of interest in the system: a nearby moon. Scanners show that a map has been carved inside the interior of the planetoid. Two large asteroids are the destination indicated by the moon map, but only one is present in the system. As it turns out, the two asteroids must have collided at some point in the past, leaving only one intact. Using the ship's weapons, the asteroid rubble is carved from the remaining asteroid, exposing some sort of holographic projector that shows the second piece of the star chart, indicating the next stop should be the Manek System.

The Breen are already in the system and obviously on their way to leave. The player engages a squadron, believing the ships carry another part of the map. Before the ships are destroyed, one of them transmits an unsecured message that the player's crew is able to intercept. It in fact contains another piece of the chart, pointing to Raveh II.

At Raveh II, the Breen are already attacking an archaeological dig site. The player's crew uncovers the final piece of the chart and assembles it but while they have to fight the Breen invaders, led by Thot Par, a Breen scientist manages to scan the chart and beam away, thus providing Thot Trel with the location of the Archive.

You must return to Defera immediately!

The Breen are searching for Preserver technology, and they have once again targeted the ruins near our city. I fear that more of my people will die, and with each death the Balance shifts. These attacks need to stop!

We are depending on you. Stop the Breen, and keep the secrets of the Preservers safe from their treachery.

Go to the Defera system, which is in the Defera Sector of the Alpha Quadrant, and stop the Breen.

To solve the puzzle at the ruins, use the individual Rally Point buttons for each Bridge Officer. Set them on each of the four corner pads and have your character stand on the center pad. At this time, all the square panels will light up. The trick is to activate the three that you need in the proper order to unlock the starmap.

You can find a cheat sheet for the puzzle here: