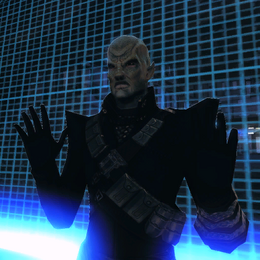 Given by:
Commander Temer
Minimum Rank (?):
6+
Repeatable:
Yes
Preceded by:
“The Helix”
Followed by:
“Gasko Blues”
Story Arc:
From the Ashes
Released:
21 May, 2013
Rewards
Experience Points:
3120

Many Remans settled on Crateris after the fallout from Shinzon's rebellion. While they were safe from the destruction of Romulus and Remus, Crateris is a bleak world with little in the way of habitable land. There are ample mineral deposits, which the Remans mine and sell for food and other necessities, but their lives there are harsh and unforgiving.

Anyone who could survive on Crateris for as long as the Remans have has strength. We could use that strength in our search for a homeworld – and I know the Remans have no love for the Tal Shiar.

Go to Crateris. Talk to the Remans. Show them we are sincere and that we need their support.

Proceed to the Crateris System in the Tau Dewa Sector Block and attempt to contact the Reman colonists there.