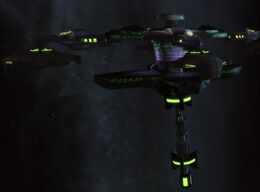 The Romulan Empire is experimenting with Borg technology in an attempt to regain their former power. They must be stopped before they attract the attention of the Collective.

The leaders of the Romulan Empire have been blinded by their ambition to salvage what remains of their Empire. In their blindness, they have begun to meddle with forces beyond their control.

During the incident at Agrama, you uncovered a message from the Hirogen indicating that they delivered a Borg sphere to the Romulans. Even more troubling was that some of the Romulan ship debris from Vulcan showed signs of being modified with Borg technology.

Our allies in the Romulan Republic have shared information regarding a failed attempt by the Tal Shiar to study and adapt Borg technology. The Tal Shiar crew that boarded the cube came to a disastrous end. Fortunately, a Republic agent was able to destroy it before it could fully activate.

Long range scans indicate the Tal Shiar have the Borg sphere they got from the Hirogen in the Pilatus system. You must travel there and destroy it. After it is neutralized, see if you can find a way to track any Borg technology the Romulans may have salvaged from it. Even a small device could prove devastating in the wrong hands.

Go to the Pilatus System, which is in the Beta Quadrant, and find the Borg sphere that the Romulans are studying. Scuttle the sphere and then attempt to track down any salvaged Borg technology.