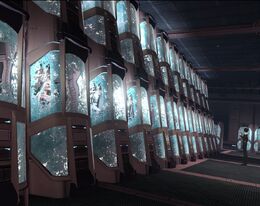 Odo has discovered a secret Ancient Dominion Station in the Masan System which holds research about the Hur'q. The player, Odo, Garak and Kira intend to see what secrets the Founders hide there.

The player brings Odo to the Masan System where they are confronted by the Female Changeling. Her forces open fire to prevent the player from reaching the station, but they retreat when Garak's fleet and the U.S.S. Defiant decloak. Garak remains behind as the player, Kira, Odo and Dukan'Rex beam down to the station to investigate.

Odo manages to access some files on the station, recorded by the Female Changeling, going back to the foundation of the Dominion over 2000 years ago. The logs detail the story of the creation of the Vorta and Jem'Hadar, and their first encounter with the Hur'q. At that time, the Hur'q were peaceful and intelligent and the Founders were looking to subjugate them using something in their food chain. Due to the planet's unusual orbit, the Hur'q went into hibernation for a thousand years. When they awoke, the Founder recorded, they were ruthlessly violent and took to the stars on a consumption rampage. The advantage of this is that they could be used to encourage other worlds to join the Dominion, in order to be protected by the Jem'Hadar.

Finally, the team also learn that the Founders had created the Fek'Ihri. The Founders had been impressed by the Klingons and wished to reengineer them into a possible replacement for the Jem'Hadar. However the addiction to Ketracel White was broken and they allied themselves to Molor.

Kira detects unusual activity on the lower levels and joins the player in investigating. There, they find stasis chambers full of Fek'Ihri are opening. After fighting off several waves of them, they are joined by Odo. Garak informs them that unusual ships are launching from the station and the Hur'q have arrived. In attempting to get to the surface to beam out, the team fight through some Hur'q. However during the fight one Hur'q gets covered in some stored Ketracel White and suddently becomes calm. Odo believes it is trying to communicate, however attempts to understand it are cut short by the arrival of Weyoun, who vaporizes it.

Back on the ship, the player fights off Fek'Ihri and Hur'q ships. However the Fek'Ihri retreat when a large Hur'q fleet arrives. The player uses the Hur'q distraction by the station to escape.

Odo's found something intriguing in the Masan system - something the Founders want no one to know about, even one of their own. That certainly piques my curiosity!

I'll meet you in the Masan system. Odo wants to travel incognito this time. I trust you'll be able to deliver him and that surly Jem'Hadar bodyguard of his to the Masan system infact.

One more thing. I've taken the liberty of informing Captain Kira, and she'll be joining us as well. After the Karemma incident, she's taken a... personal interest in high-level Dominion activity, particularly where Ambassador Odo is involved.

There are no accolades specific to this mission..