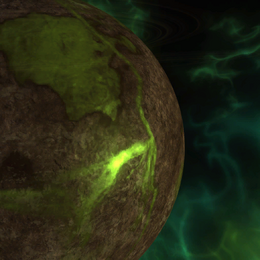 In Friend or Foe, the player continues K'mtar's earlier investigations of an internal threat to the Klingon Empire influenced by an outside power.

Following the advice of K'mtar, you travel to the Vor System in order to find evidence that the Klingon Empire has an internal threat influenced by an outside power. After much discussion, some interference by the Tal Shiar as well as assistance from the Romulan Republic, you analyze the cargo manifest of an Yridian space station officially working for the Klingon Empire that has been receiving goods from the Romulan Star Empire. Subsequently you head to First City, in order to inform Worf of the Tal Shiar collaborating with a Klingon Great House and a possible threat to his life.

During my time as ambassador, I uncovered evidence that one of the Great Houses has been corrupted by a foreign influence and plotting against the Empire. I was thrown into Rura Penthe as punishment for digging too close to the truth.

Drake suggested that we travel to the Vor System. Perhaps there we will find evidence that will shed more light upon this threat to the Empire.

Go to the Vor System, in the Mempa sector of the Beta Quadrant.