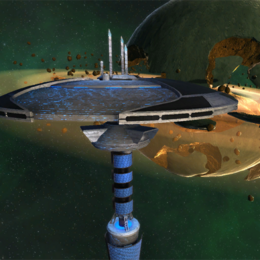 Starbase 39-Sierra monitors the dangers of Romulan space. Are you ready?

Pick up Damar Kahn on Earth Spacedock and bring him to Starbase 39-Sierra in Beta Quadrant.

Go to Earth spacedock, in the Sol system, to pick up Damar Kahn. Then transport him to Starbase 39-Sierra, which is located in the Beta Quadrant.