Star Trek Online Wiki
Register
Don't have an account?
Sign In
Advertisement
in: Age of Discovery (episode arc), Missions for all factions, Rise of Discovery 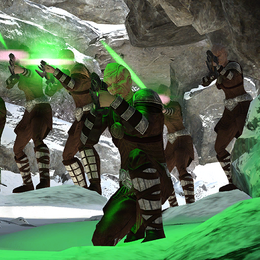 Impossibility of Reason is the second of two missions released with Rise of Discovery featuring Gabriel Lorca and Ellen Landry. Following from the loss of Aakar, the player finds themselves stranded on the ice moon of Priors 5D with Lorca and Landry, trying to survive against the elements and the Klingons hunting them.

This Klingon computer virus is giving me a bad feeling about things. With J'Ula and House Mo'Kai involved, I think we're looking at a serious new effort to capture or destroy high-value Starfleet targets... ships, personnel, or even entire planets.

Let's rendezvous with the Buran as fast as we're able. That virus is already in her systems, and after what we just dealt with, I'm guessing the Klingons aren't done with my ship just yet.

The Priors World simulation has provided some very interesting data. Starfleet Command wants to expand on what we've learned, and the latest simulation should help with that.

Your participation in this simulation is important, though the subject matter may be... sensitive. We're asking you to step into the aftermath of the battle at Priors World. You'll be dealing with the actions of J'Ula and her forces there, under extreme conditions. Good luck.

Analysis of the Priors World simulation data continues. Several agencies, including Imperial Intelligence, want to expand on that data, and they've created another simulation to do so.

Your participation in this simulation is required. The simulation will require you to step into a situation all true warriors should be prepared to face - the aftermath of defeat.

I trust you will rise to this challenge and face it with honor. Qapla'!

Your participation in this simulation will be most informative. I should warn you, however. The simulation will place you directly into the aftermath of the battle at Priors World... on the losing side. You'll be dealing with the actions of J'Ula and her forces, under extreme conditions. May the Elements guide you well.

I bring you greetings from the Founders. May you always serve them well!

A great amount of fascinating data has been obtained from the resent Priors World tactical simulation. Naturally, the quest for knowledge is a never-ending one, and so a new simulation has been commissioned. Your participation in the newest simulation is required, of course.

It's important to note that the subject matter may be... challenging for a soldier of the Dominion. It will place you into an unfamiliar situation - that of defeat, in the aftermath of the battle at Priors World. You'll contend with the forces of J'Ula, under extreme conditions. Honor the Founders. Victory is Life.

Get Captain Lorca to Safety.