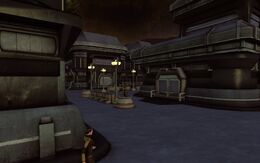 Preceded by:
“Khitomer Vortex”
Followed by:
“Into the Hive”
Rewards
Experience Points:
516

Khitomer in Stasis is a Special Task Force ground mission.

In this mission, the Borg travel back in time to awake the inactive Borg under the Vega Colony, prior to the arrival of the Khitomer Task Force. Also check the space mission “Khitomer Vortex”.

[ THIS SECTION IS IN NEED OF A REVISION. THIS SYNOPSIS CORRESPONDS TO “Khitomer Accord Space” ]

Captain D'Vak has received a report of Borg activity in the Quadra Sigma System, and asks the player to investigate. On arrival in the system the player discovers that there is indeed Borg activity, and that they have established a temporal vortex in orbit over the planet, with the intent of sending an invasion force back to assimilate the Federation in the past. The Borg send waves of vessels towards the vortex, along with heavy reinforcements. The player and their team eventually destroys the Borg transwarp gates that are feeding ships into the vortex, thus stemming the incursion, but some Borg ships have already made it through the vortex. The player follows them back to repair whatever damage they've done.

On the other side of the temporal vortex the player makes a shocking discovery; the Borg incursion leads into the attack on Vega Colony, when the player him/herself was an Ensign. The player weakens the force in orbit and beams down to the surface to find that the ground invasion has not yet begun. The player discovers a massive underground facility that has lain dormant. The facility contains Isolinear Molecular Reconverters that the collective can use to instantly assimilate any life-form. The player's team decides that these devices must be destroyed to prevent the incursion from spreading beyond Vega Colony. The team works their way through the facility, destroying the power nodes that defend the converters. Once the defenses are down the team is confronted by the architect of the Borg plan. Missing for over 20 years, the former Romulan empress Donatra is now Borg. Though appearing conflicted, the drone's message is clear: what cannot be assimilated will be destroyed.

Once Donatra is revealed the player's team must fight her guard; Tosk of Borg. This confrontation gives Donatra enough time to escape to her ship in orbit. The massive assimilated Romulan dreadnought is still equipped with a cloaking device and eludes the player's team. The team catches up with Donatra and engages in a final confrontation. Donatra calls in waves of reinforcements but the team overcomes them and destroys the dreadnought once and for all. The player takes the vortex back to the present day, and closes the final chapter of the Borg incursion... for now.

There are reports of Borg ships massing in the Quadra Sigma system.

A large Borg fleet is trouble we don't need, <rank>. Report to the Quadra Sigma system and find out what they're doing there. If you must engage, you're authorized to do so.

The Assimilated accolade allows the player to claim a unique male Borg Science Bridge Officer Candidate from the Dilithium Store.

Note: The accolade is obtainable in normal difficulty, but it must be obtained by stepping through the Isolinear Molecular Reconverter before it is destroyed.