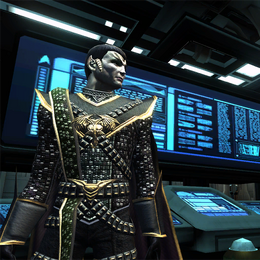 The Elachi's initial attempt to attack Rh'Ihho Station failed, but that has not put a stop to their predations.

Long-range sensors have detected groups of Elachi ships on their way to small colonies and space stations throughout the sector. They're taking as many civilians as they can load onto their vessels.

There's an attack underway right now in the Sienae System. Proceed there at maximum warp and intercept them!

Head to the Sienae system, located in the Beta Quadrant, and intercept an Elachi raider force.