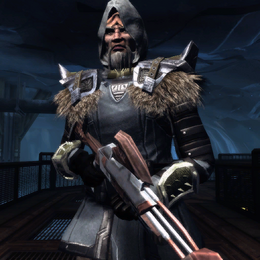 In Manhunt, the player has to apprehend the Federation prisoner, who has since been identified as Franklin Drake and traced to Rura Penthe.

The hunt for the Federation prisoner continues with an investigation in the penal colony of Rura Penthe.

Go to the Rura Penthe System and find Franklin Drake in order to bring him back alive if you can.

We have identified the Federation prisoner you've been chasing. His name is Franklin Drake. Some of our sources say he's a Starfleet Intelligence agent, but there are hints that he's much more. From what I can tell, he's not part of the normal chain of command.

Previously we didn't have any images or genetic samples from him, which is why he was so hard to identify. Now we'll be on him the second he shows his face again. We already have a lead for you to follow.

Records indicate a Klingon shuttle entered space above Rura Penthe Penal Colony. That system is restricted, and there was no traffic scheduled for today. You are authorized by the High Council to approach the system and determine if Drake is there.

Bring him back alive if you can.

Go to Rura Penthe, which is located in the Omega Leonis Sector Block, and locate Franklin Drake.