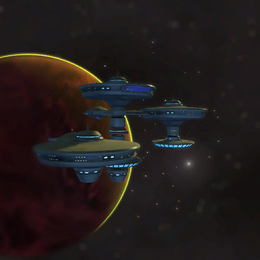 In Painful Omens, the player investigates a loss of contact with Deep Space K-13, located in Deneva System.

After arriving at the Auxiliary Control Engineering, the player, Scotty and T'Met plan to activate UV lighting, but in order to do this, Commander Scott has to repair all 4 duotronic relays. After all relays are repaired, the player can go to main engineering and try to activate the UV light, but because someone overrode the command codes, they have to go to the command centre of the station. In the command centre, Tarsi spots the Na'kuhl controlling the computers, and after eradicating the neural parasites, the Na'kuhl attack the player's away team. This attack forces Daniels to reveal his true identity, explain the situation they're in and some aspects of the Temporal Cold War.

Back in space, the player repairs the earlier disabled ships to help him and the Ptolemy in preventing the Na'kuhl from escaping; however the Ptolemy is destroyed before any of the other three ships can join the fight. In order to disable the enemy's temporal shielding, Scotty creates a modulated ion burst. This tactic proved effective, but in conjunction with the ship's explosion, it creates a spatial anomaly that pulled Deep Space K-13 and everyone onboard to the 15th century.

Starfleet hasn't heard from Deep Space Station K-13 in a while. It's in a tactically-sensitive part of the quadrant, and the brass is getting concerned.

Get out there, find out what you can, and render assistance if needed. And hey... be careful, okay? This could go sideways, fast.

Head to Deep Space K-13 and investigate why the station has stopped communicating.