Star Trek Online Wiki
Register
Don't have an account?
Sign In
Advertisement
in: Gamma Quadrant (arc), Missions for all factions, Victory is Life 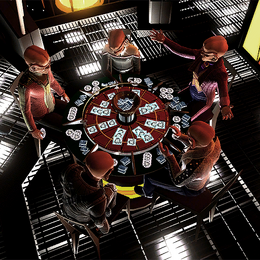 Nog calls you to Deep Space 9 to take part in a Ferengi-led heist to steal back the Sword of Kahless. The mission follows the perspective of both the player and various members of "Quark's Seven": Leeta, Rom, Nog, Leck, Brunt & Quark.

Several days earlier, Rom and Leeta are trying to convince Quark that they need to bring the Klingons into the war with the Hur'q. To do that, they want to steal back the Sword of Kahless from T'Ket. Quark points out they don't even know where the Iconians are, so Rom wants to steal the data from DS9's security office. To do this, Leeta distracts Ro Senna in Quark's with a free drink and Dabo game while Rom breaks into the security office using his engineering knowledge of the station.

They manage to learn where the Iconians are and that they'd be distracted by the Fek'Ihri. Quark assembles a team and, over the course of the episode, explains the plan over a game of Tongo. The player is recruited to escort them to T'Ket's flagship (as they'll be able to fight their way out if something goes wrong). Once on board, Quark and Nog make their way to main engineering where Nog disables their security and Quark beams something aboard.

Nog protects them with a chroniton field and Quark reveals that he has planted a Hur'q Signalling Device on the ship, correctly assuming T'Ket would struggle to fight off both the Fek'Ihri and the Hur'q. The Hur'q arrive and cause chaos as the team escape. They also cause Quark to lose the signalling device so he can't call them off when they've left as promised. Just before they leave, Quark reveals that he expected Brunt to betray them and had Madran waiting to stop him.

The team return to DS9 triumphantly and Julian Bashir analyses the sword. He finds not only that the sword is made out of a four thousand year old Hur'q carapace but manages, by cross referencing the radiation types on the sword to star charts, to identify a probable Hur'q homeworld: Havas-Kul.

Leck then steals the sword again, infuriating Rom. However, this turns out to be a ruse to fool the Alliance, and the sword is then handed over by Quark and Rom to Grilka.

My apologies for the quality of the transmission. I'm contacting you on an encrypted frequency.

I'm working on an important covert mission, and I could use your assistance. I can't go into the details over comms, but you should know - if we pull this off, it could change the course of the Hur'q conflict in our favor.

Met with me on Deep Space Nine to go over the details. Come alone. I've been asked to keep the details of the mission on a need-to-know basis and right now, only you and I need to know.

Go to DS9 in the Alpha Quadrant